Thermostats in Clarksville, IN

Home / Thermostats in Clarksville, IN

Thermostats in Clarksville, IN, Jeffersonville, IN, Louisville, KY and the Metro Region 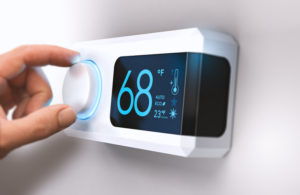 Though many homeowners question whether their thermostat needs replacing when there is a problem with their system, it is extremely rare for a thermostat to malfunction, especially an older mercury thermostat. These thermostats are extremely basic and most function as simply an on/off switch, meaning that there is not really anything to break. Virtually all modern thermostats are digital, as opposed to mercury, which means that they often include lots of added features.

This also means that the vast majority of new thermostats are battery operated, and many homeowners are unaware of the need to regularly replace those batteries. If the display on your digital thermostat has gone blank or is displaying odd characters, or if a message appears saying low battery, then you should try replacing the batteries first.

We recommend a preventative annual battery replacement, perhaps at the same time that you replace smoke detector batteries. Aside from whatever little doors there are on the face of your thermostat, there is a front piece which should snap off and a base which will stay attached to the wall. Inside the base there are usually two AA batteries. (If you do not see batteries or do not have batteries in the space for them, then your thermostat is powered by the system or line voltage.) Replacing batteries does not require you to turn off the power to your system, though you should move the system to the off position (heat/off/cool).

If you are replacing a thermostat you should always turn off the power to your system, either at the switch on the side of the furnace or at the breaker panel. (Though replacing a thermostat is not very complicated, we do make a lot of service calls where we have to correct a problem caused by a homeowner trying to replace a thermostat. We recommend that you let a professional do your thermostat replacement and do not mind installing a thermostat that you have purchased elsewhere.)

On most thermostats there are two control switches, a display panel and up and down buttons to raise or lower the temperature. One switch controls your system and says heat/off/cool. In the off position neither the furnace nor the air conditioner will run and the display will simply show you the current temperature at the thermostat, though you can still control the blower of the furnace with the other switch. You should avoid moving the system switch from heat to cool without pausing for a few seconds in the off position. When the switch is in the heat or cool position you will have a second, smaller display next to the current temperature. This is the desired temperature and can be raised or lowered with the up/down buttons.

There is a differential setting either built into or programmed into the thermostat. This setting tells the thermostat what point to turn on and off your system to accomplish the desired temperature setting. Virtually everybody uses or should use 1° for this setting. This means that if you want the temperature to cool to 75° then the system will come on when it is 76° and go off when it is 74°, and vice versa for heating settings. This prevents a system from short cycling/constantly going off and on. The other switch is the fan control and your choices are on/auto. Most people leave this switch in the auto (automatic) position, which means that the furnace blower will come on and off only when the system is demanding heat or cool.

The on position means that the blower will run continuously. We suggest that you consider leaving the fan in the on position. Circulating the air continuously is a very, very good thing. The cost per day for the electricity is pennies and you are not shortening the life of the blower motor. Turning a motor on and off does more damage than leaving it on constantly. By circulating the air constantly you are helping the system evenly distribute conditioned air throughout the house, getting rid of hot and cold spots. You are also potentially saving money, especially in the heating season. Since heat rises, the air near the ceiling is much warmer. By moving the air constantly you are recycling this heated air. In cooling season you will feel much cooler when the air is blowing on you and, hopefully, not need to set the thermostat as low.

Along this line, we STRONGLY suggest ceiling fans. Put a ceiling fan in all of the rooms and leave them on all of the time! You will save a fortune in utility costs and feel much more comfortable! About the summer/winter switch on the side of the ceiling fan: all that this switch does is control the rotation of the fan blades. The rotation of the fan blades means that either the air will blow straight down from the fan and suck up air from the edges of the room, or vice versa.

Most people do not want to feel air blowing on them in the winter so you change the switch so that the air is sucked up beneath the fan and blown down along the walls. Of course, if the chair you sit in to watch the television is against the wall then you probably don’t want to do this. Similarly, you will feel much, much cooler in the summertime if the air is blowing on you, and, you will not need to set the thermostat as low. As far as how the fan works at circulating the air, it does not matter where you put this switch. DO NOT CHANGE THIS SWITCH WHILE THE FAN IS RUNNING!

A final note about thermostats, and this actually has nothing to do with the thermostat though most homeowners believe it does: fan cycling refers to how the blower operates when the heating or cooling system is running and is controlled by the furnace. In heating season the furnace will come on first, then, after the heat exchanger has heated, up the blower will come on. Once the thermostat temperature is satisfied, the furnace shuts off but the blower continues to run for 30 – 180 seconds to dissipate the heat from the heat exchanger. In cooling season the condenser and the blower come on at the same time and the blower continues to run for a short period after the condenser has satisfied the thermostat. This is all normal operation with the thermostat fan switch set in the auto position. If your blower runs constantly with the fan switch set in the auto position then it indicates a problem with the fan cycling control or circuit board.

A system will bring on emergency heat for three reasons:

If you have the switch set to heat and the emergency light is on all of the time or far too much, then you have a problem requiring a service call. Of course, you always have a choice of manually moving the switch to emergency heat. If you are having a problem with the outside unit or you simply want to feel the warmer heat of your furnace (heat pumps deliver 90 – 100° air, furnaces 110-120°) then switch to emergency heat. This will turn off the outside unit and you will be heating solely with the indoor unit until you return the switch to the heat setting. Bear in mind that if your back-up heat is an electric furnace then your utility costs will be significantly higher than with the heat pump running.

Programmable thermostats (also called set-back thermostats) function as above but give you the option of setting up a program for raising or lowering the temperature to reflect occupancy or comfort levels. This is a GREAT thing to have and probably the easiest, cheapest cost savings change that you can make to your H.V.A.C. system. Depending upon the inside/outside temperature, raising or lowering the thermostat 1° can represent 5% of your fuel cost. Setting back the temperature when you are away or asleep can save a great deal of money.

A couple of final notes: When you are in a cycle you can still use the up/down button to change the temperature. This change will only last until the next cycle begins, then the thermostat will ignore your change and return to its programming. If you want to bypass your programming completely, there is a hold button. If you push the hold button the thermostat will quit using the program and instead use whatever setting you punch in with the up/down buttons until you release the hold button. (Simply moving the temperature up and down does NOT change the original programming of the thermostat.)

An important and useful feature is the filter or humidifier pad replacement reminder.There are so many options available under this heading that we will not pretend to address them all – there are even Wi-Fi thermostats available with systems that can communicate each other! Touch screen thermostats are becoming very common, but their functions work just the same as the instructions for switches and buttons. Almost all digital thermostats work with a menu that allows you to adjust a lot of settings, like the differential, that you should not be messing with, so be careful if you start exploring settings. (Note: You can access instruction manuals for most modern thermostats online at the manufacturer’s website.)

This reminder does not mean that your thermostat is sensing a need for a filter change (though there are high tech systems that do have this ability). It is simply a reminder. You need to tell the thermostat whether to remind you to change the filter monthly, bimonthly or annually, dependent upon what kind of filter system you are using. The humidifier pad should be changed annually.

The auto-changeover feature available on many thermostats is not really helpful for most homeowners. This feature would enable a thermostat to automatically switch from heating to cooling based upon certain differential settings. This is a good idea in some office settings but probably not something you want in your home.

Contact Us If You Have Any Questions Regarding Thermostats Services in Clarksville, IN, Jeffersonville, IN, Louisville, KY and the Metro Region